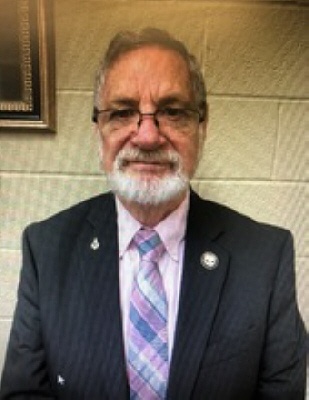 Mike was an embalmer and funeral director in California, Texas, and Arkansas. His claim to fame was embalming Jack Haley, who played the Tin Man in the “The Wizard of Oz.” He graduated from College of Mortuary Science and attended Biola University in Los Angeles for 2 years.

Mike loved performing magic for all ages with his wife, Jo. He was the owner of “The Magic Trunk” in Searcy. He was a member of the International Brotherhood of Magic; he was a past president of Ring 308 which he founded in 1993 in Searcy and was a member of Ring 29 in Little Rock. His last magic performance was for the Officers of Grand Lodge of Arkansas and other jurisdictions on Wednesday evening before his death.

Mike was a Baptist, a member of Conway First Baptist Church and Life Group 10. He was a veteran in the United States Army, and PeePo to his grandkids and great-grandkids. He was a Master Mason; a member of Lodge 145 in Beebe and Lodge 687 in McRae. He was a member of the Scottish Rite, York Rite, Knights of St. Andrew, Bendemeer Grotto, Scimitar Shriner, National Sojourners Arkansas Chapter 166, and the Order of the Eastern Star.

Visitation will be Thursday, February 10th at 12:00PM at Conway First Baptist Church with services following at 1:00PM. Graveside service will be at Oaklawn Cemetery in Searcy about 3:30PM.

Arrangements for Mike Jones are under the care and direction of Vilonia Funeral Home, 1134 Main Street, Vilonia, AR 72173. Sign his online guestbook at www.viloniafuneralhome.com.
To order memorial trees or send flowers to the family in memory of Mike Jones, please visit our flower store.