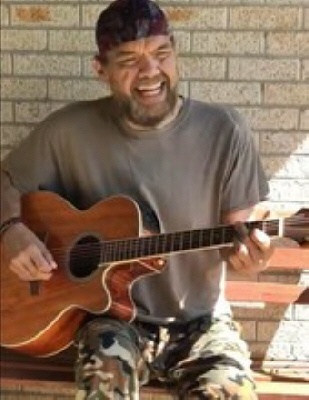 Louis Norman Cox, of Enola passed away in Conway, Arkansas at the age of 46. Norman was born on February 13, 1972 in Louisville, Kentucky to Rufus Farrell and Faith Claire (Iokepa) Cox. He graduated from Enola High School in 1990. He loved his Mom and children. He embraced everyone for who they were. He was a self taught guitarist starting at four years old, who loved to sing and entertain people. His charm and charismatic personality brought people close to him, and they grew to love "Big Norm".  He is survived by his Mother, Faith Cox of Enola; three children, Makayla Cox of Conway; Josiah Cox of Norfolk, Nebraska; Myles Cox of Cabot; three sisters, Libby Beene (Wayne) of Enola; Yolanda Smith (Zeb McClure) of Enola; Vicky Kindsfater (Eric) of Conway; one brother, Rufus F. Cox, Jr. of Enola. He was a beloved uncle to numerous nieces, nephews, and great nieces and nephews, as well as a host of extended family and friends. He is preceded in death by his wife, Dawn Lewis Cox; his father, Rufus Farrell Cox, Sr.; two brothers, Bobby Farrell Cox and Michael Dane Cox. A Memorial Service is scheduled for 1:00 PM Saturday, January 26th, 2019 at Marcus Hill Cemetery in Enola. With family and friends sharing special memories of "Big Norm". Active Pallbearers are Bobby Miller, Jesse Cox, John Cox, and Brian Rigney. Honorary Pallbearers are Rufus Cox, Jr., John Hose, James Casteel, and Bryan Lucus. Cremation Arrangements are under the care and direction of Vilonia Funeral Home 1134 Main Street Vilonia, AR 72173. Sign the online guestbook at www.viloniafuneralhome.com. P.S. If you have a memory of "Big Norm" that you would like to have shared at the memorial service, please write it down, and share it with Libby, Yolanda, or Vicky.
Memorial Service
Saturday January 26, 2019 1:00 PM Marcus Hill Cemetery Marcus Hill Road Enola, AR 72047
To order memorial trees or send flowers to the family in memory of Louis Norman Cox, please visit our flower store.