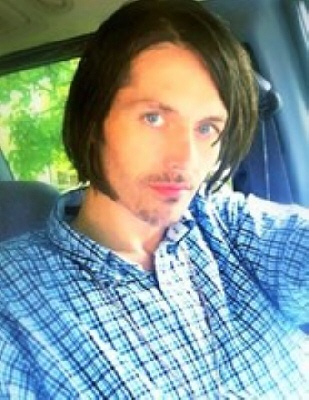 Kenneth Ray Fletcher of Little Rock, passed away peacefully at St. Vincent Infirmary Hospital on May 17, 2018 at the age of 35, surrounded by family. Kenneth was born on October 6, 1982 in Little Rock, Arkansas to Gary Scott Hogan and Patricia Ann (Fletcher) Steele. He attended Robinson High School, and later graduated from Arkansas High School in 2000. He was a talented artist and musician; and an advocate for the National Alliance on Mental Illness (NAMI).  Kenneth is survived by his best friend and wife, Brandy (Hartwick) Fletcher; his mother, Patricia (Fletcher) Steele and step-father, Dwayne of Fairland, Oklahoma; his father, Scott Hogan of Alexander, Arkansas; his brother, Arrin Hogan (Lauren) of Alexander; niece, Zoie, and nephew, Oliver Hogan of Alexander; grandparents, Stan and Nadine Beare of Damascus, Arkansas; his in-laws, Gary and Kim Hartwick, and his sister-in-law, Brittany Hartwick & nephew, of Little Rock, Arkansas, as well as a host of extended family and friends. He is preceded in death by his grandparents, Fred and Ann Hogan; and his beloved cat, Ani. The family will announce a memorial service at a later date. Please consider a memorial to the National Alliance on Mental Illness  3803 N. Fairfax Drive,Suite 100 Arlington, VA 22203 in his memory. Cremation arrangements are under the care and direction of Vilonia Funeral Home 1134 Main Street Vilonia, Ar. 72173. Sign the online guestbook at www.viloniafuneralhome.com
Private Services
To order memorial trees or send flowers to the family in memory of Kenneth Ray Fletcher, please visit our flower store.