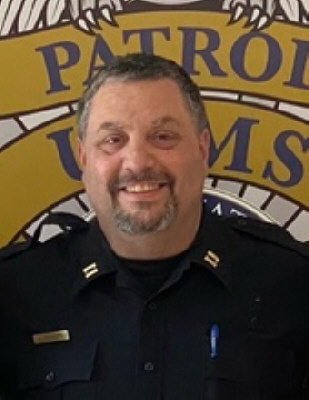 Francis Henry Douglas Hichens, IV; known to all as Fran, of Greenbrier, Arkansas, received his healing from a very short five week battle with cancer when he entered his eternal home on Monday, June 20th, 2022, at the age of 53.

He was born on December 22, 1968, in Cobleskill, New York. He was a veteran serving in the United States Air Force in the Desert Storm War. After 9/11 he re-enlisted in the United States Navy as a military police officer serving during Operation Enduring Freedom. He received two National Defense Service Medals, the Kuwaiti Liberation Medal, the Meritorious Service Medal in Combat in Mogadishu from the United States Air Force. He retired as a Police Officer from the North Little Rock Police department, and then put on another uniform and worked for ten years at UAMS Police Department where he remained and was promoted Captain, second in command to the Chief. In 2021, he removed his shield for the last time and retired after 27.5 years from law enforcement.

Fran also worked as a resource officer where he developed and taught the D.A.R.E. program. He received the Chief's award for developing a community outreach program for kids and teens when he created the Junior Police Academy. This academy helped teach young people about the profession of law enforcement.

Most importantly, Fran was a Christian, that in spite of his illness, his faith remained in the Lord. Fran was member of Crosspoint Church in Conway for the last seven years. At church he served as head of security, he was trained and taught classes on active shooter awareness. He also served on two mission trips to Kayenta, Arizona to the Navajo Reservation.

He was preceded in death by his grandparents.

Services for Fran Hichens are under the care and direction of Vilonia Funeral Home, 1134 Main Street, Vilonia, AR 72173. Sign his Book of Memories at www.viloniafuneralhome.com.

Please Note: Vilonia Funeral Home is not affiliated with, nor do we endorse any online flower company. Because of past delivery issues, we do not advise ordering flowers online. You should contact one of our local florists directly. If you need help with this, please give us a call.
To order memorial trees or send flowers to the family in memory of Francis Henry Douglas Hichens, please visit our flower store.